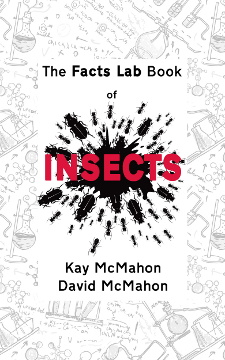 Insects, eh? Love them or loathe them, there’s no ignoring them.

There’s a lot more to insects than people think. Yes, they can be pests. It’s not pleasant to find yourself plagued by wasps and ants the moment you settle down to a picnic, and it can be downright horrible to turn on the kitchen light in the middle of the night and see a cockroach scuttling for cover.

On the other hand, there’s more about a honey bee’s buzzing from flower to flower than the pleasantly soporific hum, or the mere mechanical production of honey. (Mmm, tasty insect vomit.) Did you know that if it weren’t for honey bees and other pollinating insects, the world would be suffering a severe shortage of fruit and veg?

The amount of variety in the insect world is amazing – although maybe not so amazing after all, when you consider that beetles alone probably account for a quarter of all known species of animal. They’re capable of all sorts of feats of physical endeavour and endurance.

This entertaining and informative book separates the truth from the myths – including in some cases where truth is even stranger than fiction. Could cockroaches really survive a nuclear winter? Did the Australians really have to introduce dung beetles to cope with all the mess of the cattle they’d imported earlier? Do earwigs really find their way into your middle ear? And should we be scared of dragonflies as the Europeans believe, or admire them, as the Japanese do?

There’s no getting away from the dark side of insects, though. You’ll find out about the most dangerous animal on Earth. You’ll read about the insect that mutilates and enslaves other insects. And the femme fatale that lures her cousins’ lovers to their deaths.

Naturally, we’ve stuck to the well-established Ergo Guides tradition of giving you 102 facts for the price of 101.

The Facts Lab Book of Insects is a great springboard for you to launch yourself into the fascinating world of insects. Read it, and you might find yourself pausing before you squash that next bug.